When my younger daughter initiated a study of elephants (her favorite animal), I didn’t anticipate the emotional reading we had in store. Along with silly stories and scientific facts, we read stories of animal cruelty and elephants’ bravery. My daughter loves elephants even more now (and understands why we shouldn’t ride on them!), and her affection is tempered by a burgeoning respect for the dignity of all creatures, great and small. By looking at elephants across different cultures, throughout history, and from different disciplinary perspectives, we all came away with new-found appreciation for these impressive animals. 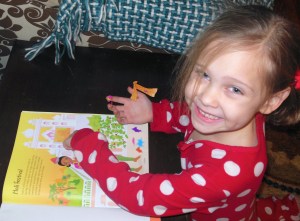 (Image includes a page about India from Usborne’s Sticker Dolly Dressing: Costumes around the World.)

My husband and I suggested studying a country each month, beginning with India, largely because we wanted to take our girls out for Indian food. This unit contains a lot of folk and fairy tales from ancient India, but one of the things I love about this unit (and unit studies more generally) is the interdisciplinarity. We read folk tales about mathematics and played related games on our own, explored the geography of a nation and its neighbors, and investigated the animals who turned up in so many stories. I was conscious, as I selected these texts and pursued them with my children, of the complicatedness of studying other cultures; as the Indian feminist Uma Narayan says “[t]hinking about food has much to reveal about how we understand our personal and collective identities. Seemingly simple acts of eating are flavored with complicated, and sometimes contradictory, cultural meaning.” We approached India as outsiders and came away with a cross-disciplinary perspective that gave us a glimpse into the subcontinent—and food for thought about our own place in the world.