I started this list because of all the buzz about Moana; while I realize that film is not totally rooted in Hawaiian culture, I wanted my children to have a deeper understanding of the rich history of one of the Polynesian islands than a single film (however dominant in the marketplace) could provide. What follows is a list that delves into the historical, geological, and mythological stories of Hawaii. There are stories that focus on native peoples, colonialism, Pearl Harbor, and President Obama, as well as tales that tell of contemporary, everyday life on the islands. There are stories of the volcanoes and wildlife that make the islands unique. And there are, of course, stories from the mythological tradition (many about Maui that, my elder daughter noted, did not make it into the Disney movie). As always, I appreciate the interdisciplinary approach of this list and the way it illustrates a place with a rich history that is by no means confined to the past.

To complement our unit on New York, we looked more broadly at the United States, too. The goal of this list was to provide an overview of the geography of the fifty states and a brief introduction to how the states got started. There are so many directions we can explore from this list, but my purpose here was to give my girls a sweeping view of our country so we can dig into the details later, from sea to shining sea. 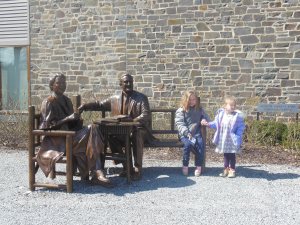 I’ve lived in New York for nearly a decade now, though I’ve never been to New York City during that time. I know…I know. I’m not exactly a city girl. This list includes the glamorous, bustling Big Apple, but, like my experience, it showcases the rest of this great state, too. From history to politics to classics in American literature to landmark environmental movements, this list illustrates the richness of New York. And while I haven’t taken my girls to Times Square…yet, they’re just as excited about the big city as they are about Niagara Falls and the rolling farmland closer to home. I hope you enjoy this list, and I hope it helps you see the Empire State in a new way, too.